After another down day (September 21) on Wall Street, which followed a three-week losing streak, it is no wonder that today many crypto traders are nervously watching the U.S. stock market for some guidance on where crypto prices are headed.

Concerns over the seeming inability of lawmakers in Washington to reach consensus on another COVID-19 relief fiscal stimulus package, as well as fears that the rapidly rising number of new COVID-19 cases in Europe could further hurt the world economy, led to another sell-off on Wall Street on Monday, with the the Dow, the S&P 500, and the Nasdaq falling by 1.8%, 1.2%, and 0.1% respectively. Had it not been for a late-day tech rally (led by Apple and Amazon), the Nasdaq’s losses could have been much closer to the losses of the other two major U.S. stock indexes.

According to a report by CNBC, Lindsey Bell, Chief Investment Strategist at Ally Invest, said in a note:

“Coronavirus concerns have resurfaced, worrying investors that a reversal in reopening progress could be near.

“More and more uncertainty is arising as we get closer to the election but no closer to Congressional fiscal relief. But we’re still optimistic this dip will be bought sooner rather than later.”

CNBC’s report also mentioned that Dr. Jean Boivin, Head of Economic and Markets Research at the Blackrock Investment Institute (BII), had this to say:

“Market volatility is returning after months of steady advances in risk assets, and we see elevated volatility ahead of the November U.S. election.

“In addition, negotiations of a new U.S. fiscal package are dragging on, the pandemic is still spreading in many countries, and U.S. China tensions are running high.”

Another factor that could be affecting the crypto markets is the recent strengthening of the U.S. dollar, which has partly come as the result of the struggles of both the European Union and the UK against the COVID-19 pandemic, which could result in second lockdowns in the near future.

For example, according to a report by BBC News, on Monday, Sir Patrick Vallance, the UK’s Government Chief Scientific Adviser, warned that if no further action was taken, the number of new COVID-19 cases could reach 50,000 a day by mid-October:

“If, and that’s quite a big if, but if that continues unabated, and this grows, doubling every seven days… if that continued you would end up with something like 50,000 cases in the middle of October per day.

“Fifty-thousand cases per day would be expected to lead a month later, so the middle of November say, to 200-plus deaths per day.

“The challenge, therefore, is to make sure the doubling time does not stay at seven days.

Generally, when traders are in a risk-off mood, cash becomes king, and a stronger dollar makes the idea of taking profits from risk-on assets such as stocks and crypto and holding them in cash (in the form of USD) more appealing.

According to a report by Kitco News, Phil Streible, Chief Market Strategist at Blue Line Futures, had this to say yesterday about the dollar’s upside move:

“Both the equities markets and gold are seeing a sell-off on Monday, with a combination of a strong dollar and political factors behind the push downwards.

“The dollar index is coming up, it actually broke up to the upside. That’s going to weigh on commodities in general, so if you look at all the commodities: agricultural markets, energies, metals, they’re all under a lot of pressure so that’s one part of the equation, is the dollar coming up.

“There’s a second part here which is kind of political…with the Republicans indicating that they’re going to go forward in nominating the Supreme Court justice, what that did was it really got the Democrats quite upset and they’re going to do whatever they can to retaliate.”

“Whether or not the dollar index is going to go up or back down determines whether we go into a deflationary environment, which is not good for commodities or gold, or stocks, or we go into a stagflation, which is actually good because you’re creating inflation, with that slower growth, and they’ll try to re-stimulate that growth so it’s a good situation for commodities.”

As for rest of the other cryptoassets, to give you a rough idea of how things are going right now, 15 out of the top 20 cryptoassets by market cap are currently in the red (i.e. down against USD).

The Crypto Fear & Greed Index, which is based on an analysis of “emotions and sentiments from different sources”, is currently telling us that we are in “Fear” category: 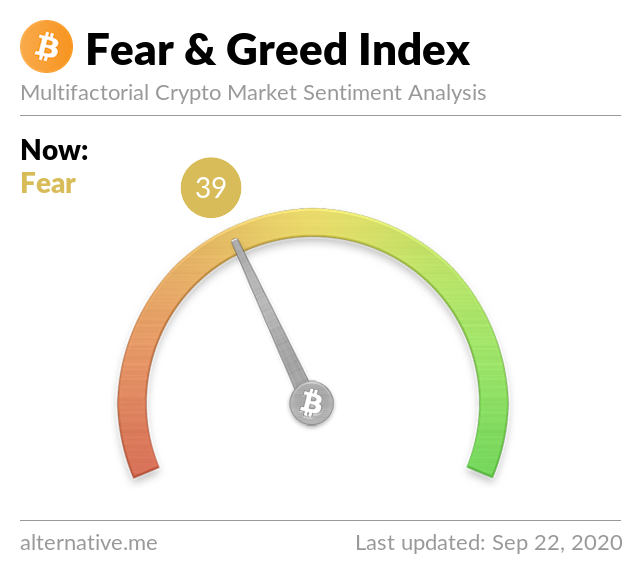 Featured Image by “WorldSpectrum” via Pixabay.com

Tim Ferriss on Bitcoin: ‘Hell Hath No Fury Like Holders of a Debased Currency’