Since the current bull started on October 1, Bitcoin has gone up over 74%, with the Bitcoin price currently just 9% from its all-time high. So, what makes this bull ran different from the one that took place in the second half of 2017?

According to data from CryptoCompare, Bitcoin started the year at $7,183, and got as high as $10,500 by February 13. Then, as COVID-19 started to become a pandemic, the Bitcoin price stated to fall (just like the prices of other risk assets), and by March 13 (the day after the World Health Organization declared COVID-19 a pandemic), the Bitcoin price had fallen to a low of $3,948.

So, what are the factors behind Bitcoin’s amazing performance in 2020 that make this bull run different from the one that took place in the second half of 2017 and saw the Bitcoin price reach an all-time high (ATH) of $19,870 on 17 December 2017?

On May 6, Macroeconomist and crypto analyst Alex Krüger mentioned some of the main macro drivers for Bitcoin in a Twitter thread:

And earlier today, veteran macro investor Dan Tapiero explained why Bitcoin is enjoying much stronger macro fundamentals in 2020 than in 2017:

Institutional Interest in Bitcoin as a Treasury Reserve Asset

Although several listed companies decided to invest in Bitcoin and use it as a treasury reserve, perhaps the most important was Nasdaq-listed business intelligence company MicroStrategy Inc. (NASDAQ: MSTR), which announced on August 11 that it had “purchased 21,454 bitcoins at an aggregate purchase price of $250 million” to use as a “primary treasury reserve asset.”

“This investment reflects our belief that Bitcoin, as the world’s most widely-adopted cryptocurrency, is a dependable store of value and an attractive investment asset with more long-term appreciation potential than holding cash.

“Since its inception over a decade ago, Bitcoin has emerged as a significant addition to the global financial system, with characteristics that are useful to both individuals and institutions.

“MicroStrategy has recognized Bitcoin as a legitimate investment asset that can be superior to cash and accordingly has made Bitcoin the principal holding in its treasury reserve strategy.”

Saylor went on to say:

“Our decision to invest in Bitcoin at this time was driven in part by a confluence of macro factors affecting the economic and business landscape that we believe is creating long-term risks for our corporate treasury program ― risks that should be addressed proactively.

“Those macro factors include, among other things, the economic and public health crisis precipitated by COVID-19, unprecedented government financial stimulus measures including quantitative easing adopted around the world, and global political and economic uncertainty.

“We believe that, together, these and other factors may well have a significant depreciating effect on the long-term real value of fiat currencies and many other conventional asset types, including many of the assets traditionally held as part of corporate treasury operations.”

Then, on September 15, the MicroStrategy CEO tweeted that his company had bought another 16,796 bitcoins:

On October 8, another Nasdaq-listed company, Jack Dorsey’s payments firm Square, announced that it had “purchased approximately 4,709 bitcoins at an aggregate purchase price of $50 million,” and went on to say that Square “believes that cryptocurrency is an instrument of economic empowerment and provides a way for the world to participate in a global monetary system, which aligns with the company’s purpose.”

‘HODL FOMO’ Rather than ‘Speculation FOMO’

In the most recent episode of Coindesk’s “The Break Down” podcast, journalist Nathaniel Whittemore made the interesting distinction between “HODL FOMO” and “Speculative FOMO”.

As for investor sentiment in the crypto community, the Crypto Fear & Greed Index, which is based on an analysis of “emotions and sentiments from different sources”, is currently telling us that we are in “Extreme Greed” category: 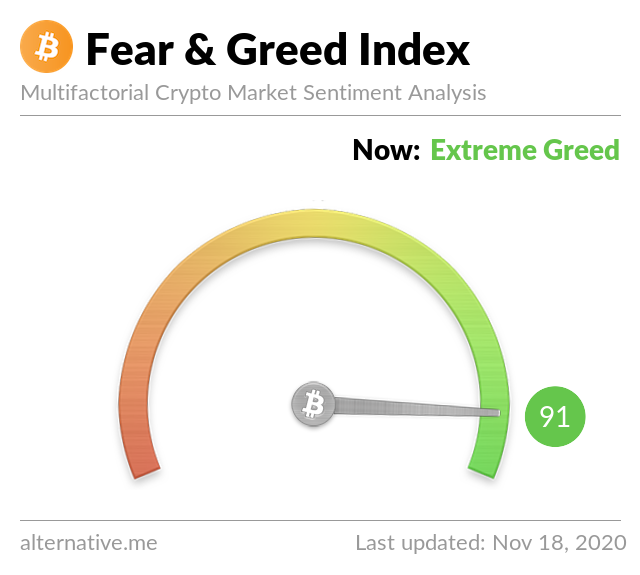 In contrast, back in 2017, Bitcoin’s price rally seemed to be mostly led by mainstream retail investors.

One data point that supports this thinking is that data from Google Trends shows that worldwide search interest in the keyword “Bitcoin” experienced a huge surge between October 1 and December 23, 2017, whereas in 2020, search interest for “Bitcoin” has mostly remained flat.

On November 16, the day that Bitcoin’s price surged over $16,800 to yet another new high for 2020, Bloomberg pointed out that “almost no one’s talking about” Bitcoin’s “notable rally.”

According to a Bloomberg report published on November 16, despite the impressive recent gains and the fact that Bitcoin is only “about 15% shy of its vaunted record highs,” the “mania that surrounded digital currencies” back in 2017 is “largely absent.”

“The fascination with it has worn off. You have the hardcore ‘I’m a cryptocurrency investor’ group but it hasn’t really expanded because it’s been so volatile, there have been so many questions around security and what regulations might do…

“The number of questions I get on it now is a fraction of what I got a couple of years ago when it was really hot.”

“It’s kind of in the shadows right now… Bitcoin gets attention when it looks like the world is coming to an end, it’s the anti-vaccine trade. As stocks and everything else have done better and people have forgotten about trade wars and things have been eclipsed by the pandemic, Bitcoin has taken a back seat to all of that.”

The Bloomberg report also mentions that Matt Maley, chief market strategist at Miller Tabak + Co., says that this seems to be a largely institution-led rally rather than a retail-driven one:

“The individuals — a lot of those people got burned badly — they’re less excited about it now… It’s certainly not the huge hoopla we had back in 2017 — that could change if it breaks above the 2017 highs.”

Prominent Traditional Investors Getting Into Bitcoin

On May 11, the day on which Bitcoin had its most recent halving event, PTJ, who is the Founder and the Chief Investment Officer (CIO) of asset management firm Tudor Investment Corporation (aka “Tudor’), explained why he believes so strongly in Bitcoin.

PTJ made some very bullish comments about Bitcoin (as an inflation hedge) in the investment letter (“Market Outlook — Macro Perspective”) sent out to clients of the $22 billion macro hedge fund “BVI Global Fund”, which is managed by his asset management firm Tudor Investment.

Bloomberg was the first to report (on May 7) that according to this investment letter, the offering memoranda for the Tudor BVI Global Fund had been updated to disclose that Tudor Investment Corporation “may trade Bitcoin futures” for the fund and that the “initial maximum exposure guideline for purchasing Bitcoin futures” had been set to “a low single digit exposure.”

Within a few hours of this news being reported, Bitcoin had surged past the $10,000 level for the first time since February 18.

And on November 9, Druckenmiller, who was highly skeptical of Bitcoin as recently as last June, revealed that he now owns Bitcoin as part of his investment portfolio.

The legendary investor, who now manages his wealth via the Duquesne Family Office, feels differently about Bitcoin these days since on November 9 during an interview with CNBC he admitted that he owned some Bitcoin as part of his investment portfolio (unfortunately, he did not mention the amount of BTC he is holding).

Here is Druckenmiller explaining why he now likes Bitcoin (even though he holds a larger position in gold):

“Bitcoin could be an asset class that has a lot of attraction as a store of value to both millennials and the new West Coast money — and, as you know, they got a lot of it,” said the billionaire. “It’s been around for 13 years and with each passing day it picks up more of its stabilization as a brand…

“I own many many more times gold than I own Bitcoin. But frankly if the gold bet works, the Bitcoin bet will probably work better because it’s thinner, more illiquid and has a lot more beta to it.”

Furthermore, highly bullish comments about Bitcoin by J.P. Morgan (on October 3) and Citibank (on November 13) made Bitcoin HODLers even more excited.

We could cite many examples here, but the most important announcement of support for mainstream adoption and usage of Bitcoin (and some other cryptoassets) came from PayPal Holdings on October 21.

According to PayPal’s press release, “the migration toward digital payments and digital representations of value continues to accelerate, driven by the COVID-19 pandemic and the increased interest in digital currencies from central banks and consumers.”

PayPal’s new service, which was launched in beta form to around 10% of PayPal users in the U.S., allows PayPal customers to “buy, hold and sell cryptocurrency directly from their PayPal account.” Furthermore, PayPal plans to “significantly increase cryptocurrency’s utility by making it available as a funding source for purchases at its 26 million merchants worldwide.”

Dan Schulman, President and CEO, PayPal, had this to say:

“The shift to digital forms of currencies is inevitable, bringing with it clear advantages in terms of financial inclusion and access; efficiency, speed and resilience of the payments system; and the ability for governments to disburse funds to citizens quickly.

“Our global reach, digital payments expertise, two-sided network, and rigorous security and compliance controls provide us with the opportunity, and the responsibility, to help facilitate the understanding, redemption and interoperability of these new instruments of exchange.

“We are eager to work with central banks and regulators around the world to offer our support, and to meaningfully contribute to shaping the role that digital currencies will play in the future of global finance and commerce.”

PayPal said that the supported cryptoassets would initially be Bitcoin, Ethereum, Bitcoin Cash, and Litecoin — users would be able to buy, sell, and hold these cryptocurrencies “directly within the PayPal digital wallet” — and the only supported jurisdiction would be the U.S. PayPal plans to “expand the features to Venmo and select international markets in the first half of 2021.”

Europhoria Due to Recent Good News About COVID-19 Vaccines

So far month, we have had two great pieces of news related to COVID-19 vaccine development.

On November 9, American multinational pharmaceutical corporation Pfizer Inc. announced some highly encouraging news about the COVID-19 vaccine it has developed in collaboration with German biotechnology company BioNTech SE. In its press release, Pfizer said their mRNA-based COVID-19 vaccine candidate, “BNT162b2”, was found to be “more than 90% effective in preventing COVID-19 in participants without evidence of prior SARS-CoV-2 infection in the first interim efficacy analysis.”

And just one week later, American biotechnology company Moderna announced via a press release that “the independent, NIH-appointed Data Safety Monitoring Board (DSMB) for the Phase 3 study of mRNA-1273, its vaccine candidate against COVID-19, has informed Moderna that the trial has met the statistical criteria pre-specified in the study protocol for efficacy, with a vaccine efficacy of 94.5%.”

Featured Image by “SnapLaunch” via Pixabay.com