This article provides an update (as of September 18) on the cryptoasset market, with a particular focus on the following digital assets: Bitcoin (BTC), Ether (ETH), and Chainlink (LINK).

To give you a rough idea of how well the crypto market is doing today, 43 of the top 50 cryptoassets (by market cap) are currently in the green (i.e. up against USD).

The Crypto Fear & Greed Index, which is based on an analysis of “emotions and sentiments from different sources”, is currently telling us that we are in “Neutral” category: 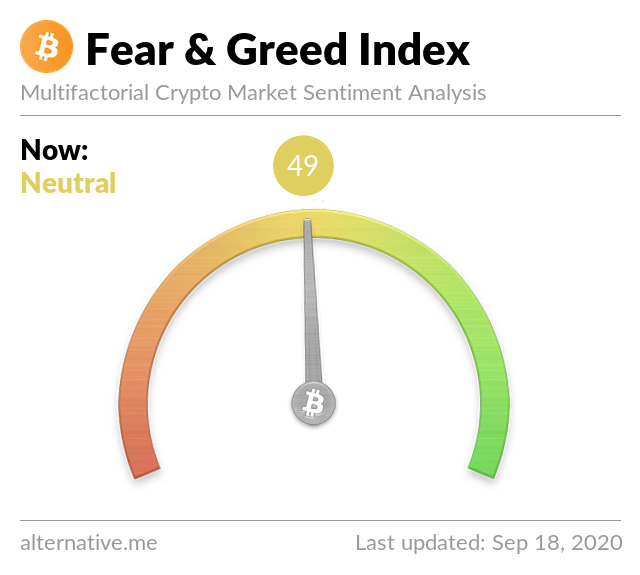 All market data used in the remainder of this article was taken from CryptoCompare around 09:55 UTC on 18 September 2020.

The Bitcoin price is currently just over $11K, which is roughly where it was after the conclusion of this month’s FOMC meeting and release of Fed Chair Jerome Powell’s statement from the FOMC press conference on Wednesday (September 16):

Although Fed Chair Powell acknowledged that the recovery of the U.S. economy from had “progressed more quickly than generally expected,” he also pointed out that “overall activity remains well below its level before the pandemic and the path ahead remains highly uncertain.”

Fed Chair Powell also commented on inflation in the U.S.:

“The pandemic has also left a significant imprint on inflation. For some goods, including
food, supply constraints have led to notably higher prices, adding to the burden for those
struggling with lost income.

“More broadly, however, weaker demand, especially in sectors that
have been most affected by the pandemic, has held down consumer prices, and overall, inflation
is running well below our 2 percent longer-run objective.”

He then went on to reiterate the Fed’s new approach to dealing with inflation:

“Hence, as we say in our statement, with inflation running persistently below 2 percent,
we will aim to achieve inflation moderately above 2 percent for some time so that inflation
averages 2 percent over time and longer-term inflation expectations remain well anchored at
2 percent.

“We expect to maintain an accommodative stance of monetary policy until these
outcomes, including maximum employment, are achieved.

“With regard to interest rates, we now indicate that we expect it will be appropriate to maintain the current 0 to 1/4 percent target range for the federal funds rate until labor market conditions have reached levels consistent with the Committee’s assessments of maximum employment and inflation has risen to 2 percent and is on track to moderately exceed 2 percent for some time.”

Although some crypto traders expected this announcement to move the price of both U.S. stocks and Bitcoin higher, that has not so far happened for two reasons:

Yesterday, prominent macro-economist and crypto analyst/trader Alex Krüger talked about the markets’ reaction to Powell’s comments following the conclusion of the FOMC meeting:

However, in the long term, most crypto traders seem to bullish on Bitcoin, especially after Nasdaq-listed MicroStrategy Inc. revealed on Tuesday (September 15) that it had “completed its acquisition of 16,796 additional bitcoins at an aggregate purchase price of $175 million” a day earlier:

Many people in the crypto space now think it is only a matter of time before other companies start using Bitcoin as a primary treasury reserve asset.

Although Ether, the second most valuable cryptoasset by market cap, started the week at $358.39, it is currently trading around $388.14, up 2.59% vs USD in the past 24-hour period and more significantly up 8.3% since Monday.

The main driver for Ether’s upward move seems to have been the announcement by automated liquidity protocol Uniswap that it had minted one billion UNI (Uniswap’s governnance token), 60% of which is for Uniswap community members, with 15% of this amount already allocated and available to be claimed by past users (anyone who used Uniswap before 1 September 2020):

The huge surge in activity on the Ethereum network due to around 100,000 users trying to claim their 400 UNI (worth over $2000 at the time of writing) per wallet prize and then some of these people trying to sell part/all their UNI tokens on various centralized and decentralized exchanges may have made the Ethereum blockchain almost unusable in the past two days, but the resulting very high gas fees (which reached as high as 700 Gwei) helped Ethereum miners to make almost $1 million in a single hour yesterday:

Scott Melker, a crypto trader at TexasWest Capital, commented on ETH’s rise in value in response to Uniswap’s giveaway of its governance token:

Decentralized oracle framework Chainlink’s native token, LINK, is currently trading around $10.90, up 0.83% vs USD in the past 24-hour period:

Although the price of Chainlink’s LINK token has been showing a downward trend since August 30 when the price reached an intraday high of $17.70, as usual, there was good news regarding the adoption of Chainlink:

Binance Jersey Shutting Down Operations… Due to Disappointing Trading Volumes?

Bitcoin Bounces Back Once Again, This Time From the $9,900 Level