The opaque nature of cryptocurrency classification may soon become more transparent as crypto exchanges such as a Coinbase and Kraken have developed a system to determine the security status’ of cryptocurrencies.

According to the WSJ, the recently formed Crypto Ratings Council (CRC), comprised of finance giants such as Coinbase, Circle Internet Financial, Bittrex, and Kraken, have devised a crypto rating system which will denote the classification status of a cryptocurrency. All in an effort to highlight which tokens should, and shouldn’t be listed and traded.

How Does it Work?

The method itself will work via a “scalable, points-based rating system.” Ratings between 1 and 5 are given to cryptocurrencies, such as bitcoin and ethereum; the higher the rank, the greater the likelihood that a token will be deemed a security.

Bitcoin, along with several other prominent assets, has already undergone a rating, receiving a lowly rank of 1. This means bitcoin is nowhere near a security, which stands as pretty good news for investors.

In bitcoin’s report, the CRC cites several factors as to why BTC doesn’t classify as a security. Among them is an absence of a token sale, something many cryptocurrencies cannot boast. 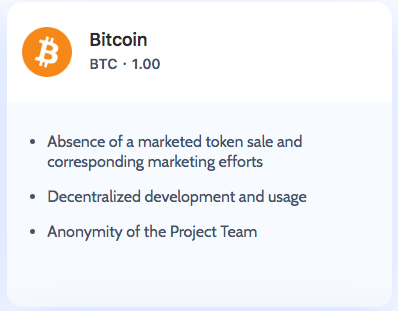 On the other end of the spectrum is Ripple’s token, XRP, which has for years battled through various lawsuits to prove its non-security status. Unfortunately for both XRP holders and Ripple, the system deemed it more likely than not to be a security with a rank of 4. Among the report’s findings were a nod to the use of “securities like language,” as well as marketing which implies “an opportunity to earn profits.” 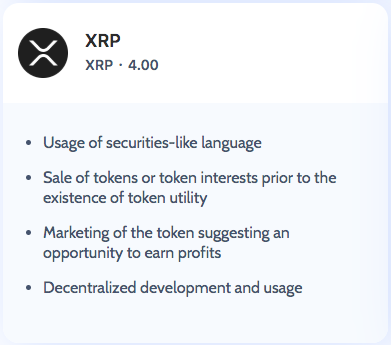 The main issue with classifying cryptocurrencies as securities are that it dooms them to be regulated as such, requiring investor registration, accreditation, and disclosure.

A Replacement for the Howey Test?

The issue surrounding the classification of cryptocurrencies has mired the regulation of many digital assets. The securities and exchange commission (SEC), currently uses a somewhat antiquated model for deciphering security status, the Howey test.

A security, as defined by the Howey Test, must fulfill four criteria 1) an investment of money, 2) in a common enterprise, 3) with an expectation of profit, 4) solely from the effort of others.

In contrast – according to a blog post by Coinbase – the CRC test  ascertains security status by asking a range of questions, “derived directly from SEC guidance and case law.”

We also worked hard to focus our framework on objective, repeatable, fact-driven questions that can be answered consistently by technical experts across different assets and over time.

Luckily for some, the rating doesn’t necessarily condemn a token to a particular classification permanently.

We expect that some ratings will change over time and we will accept and consider feedback from asset issuers when they want to share additional information or clarifications that may impact an asset’s rating.

This method remains advisory and purely for the use of exchanges when considering a token listing. Still, it marks an essential step towards self-regulation, and will perhaps minimize investor deception or confusion.

Bitcoin ($BTC) Investors Should Be ‘Accumulating’ Before Rise to $150,000: Bloomberg Analyst