So, what’s behind the this amazing price rally that we have witnessed over the past few weeks?

Charles Hayter, Co-Founder and CEO of cryptoasset market data provider CryptoCompare, told CryptoGlobe that he believes the two main positive catalysts are (i) increasing recognition of the value of Bitcoin as the ultimate hedge against potential higher inflation due to quantitative easing by the world’s major central banks; and (ii) increasing institutional support for Bitcoin.

With regard to the former, the CryptoCompare CEO says:

“Several high-profile central banks including the Reserve Bank of Australia and Bank of England have announced drastic Quantitative easing (QE) plans to combat the economic threat of COVID-19. Whilst these measures seem prudent some investors are concerned this will lead to a significant rise in inflation. Typically gold has been seen as the de facto hedge against rising inflation but more and more Bitcoin is turned to as a hedge against inflation.

“Bitcoin’s position as a gold competitor is set to increase as millennial investors—who strongly favor BTC over gold—will become a larger and more important component of the investor universe. Gold still has a 10x market cap in comparison to Bitcoin and even a small crowding out of gold by Bitcoin as the alternative currency would lead to a 2-3x in Bitcoin price.”

And with regard to the latter, Hayter says:

“Another factor driving the Bitcoin price is the additional corporate support for Bitcoin we have seen during the past three months from the likes of MicroStrategy and Square buying significant quantities of Bitcoin to use it as a treasury reserve asset. And, most importantly PayPa, allowing its users to buy, sell, and hold cryptocurrencies is in our view the most important news this year for the digital asset industry.

“This corporate support for Bitcoin combined with the fact that this month we have seen the BTC price rise to levels last seen in Jan 2018 and that we are only about six weeks away from the 3rd anniversary of Bitcoin reaching an all-time high of almost 20K has helped drive the price as traders see significant upside potential.”

Although we are not yet seeing the kind of retail FOMO we had back in late 2017, as confirmed by web search data, within the crypto community, social media activity suggests that there is currently a very high degree of bullishness on Bitcoin and a feeling that it is almost inevitable that the current bull run will take the price of Bitcoin beyond its December 2017 high of almost $20K.

The Crypto Fear & Greed Index, which is based on an analysis of “emotions and sentiments from different sources”, is currently telling us that we are in “Extreme Greed” category: 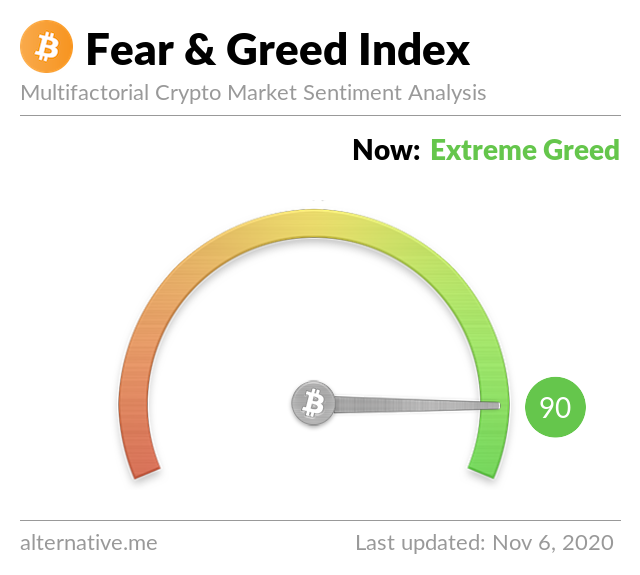 As for this week in particular, it has been no ordinary week. Tuesday was Election Day in the U.S., and projected results from various news organizations suggest there is a strong likelihood that the next U.S. president will be Joe Biden and that there will be a split U.S. Congress, with the Democrats and the Republicans remaining in control of the House of Representatives and the Senate respectively.

“It looks likely that we’ll see a split Congress, which, based on history, has been the preference of the stock market. You can see this expectation being priced into the market [Wednesday] with health care, communication services and technology stocks are leading the market.”

“With no blue wave, we are likely to see the Senate remain very closely divided, which will constrain the policy options of whoever wins the presidency. That probably rules out any substantial activity on taxes, as well as limiting any actions to control the major tech firms.”

According to a report by Business Insider, yesterday, during an interview on CNBC’s “Squawk Box”, Michael Novogratz, Founder and CEO of Galaxy Digital, explained why he thinks investors in U.S. equities and Bitcoin seem happy with the U.S. election results:

“The markets are liking this… Stocks are gonna do well… Less fiscal, more Fed, good for crypto… We have crossed the Rubicon in its adoption… We’re at the start of a really big bull market there… You’re going to have every central bank issuing a digital currency within the next five years.”

What Novogratz appears to be thinking is that although we might see less fiscal stimulus with a Republican-controlled Senate, the Federal Reserve will have to step with with more monetary stimulus, which should help to push up the prices of U.S. equities, as well as the Bitcoin price, since many people believe that the latter might be a great inflation hedge.

Speaking of the Federal Reserve (the central bank of the U.S.), yesterday, at the FOMC press conference, had this to say about what the Fed intends to do to support the U.S. economy:

“The current economic downturn is the most severe in our lifetimes. It will take a while to get back to the levels of economic activity and employment that prevailed at the beginning of this year.

“If you want to get the the economy back as quickly as possible to where we want it to be, then really it should be all of government working together. Is monetary policy out of power or out of ammo? And the answer to that would be ‘no’. I don’t think that.

“I think that we are strongly committed to using these powerful tools that we have to support the economy during this difficult time for as long as needed and no one should have any doubt about that.”

And needless to say, these words were music to every Bitcoiner’s ears. One of those Bitcoiners is Tyler Winklevoss, Co-Founder and CEO of digital asset exchange Gemini: