Following a week of bullish news for Bitcoin, the BTC price is managing to hover around the $13,000 level despite the disappointment of investors who were hoping to see a U.S. stimulus bill get signed into law before Election Day (November 3).

News-wise, with one important exception, this has been a fantastic week for Bitcoin (and to a lesser extent Ether, Bitcoin Cash, and Litecoin).

First, on Wednesday (October 21), FinTech startup Mode Global Holdings PLC (“Mode”) announced that it had become the first publicly listed company (PLC) in the UK to adopt Bitcoin as a treasury reserve asset.

According to Mode’s press release, it has “allocated up to ten percent (10%) of its cash reserves to purchase Bitcoin and adopt it as a treasury reserve asset.” Mode says that this move is part of its “long-term goal to protect investors’ assets from currency debasement.”

This decision by Mode to use Bitcoin as a treasury reserve asset follows in the footsteps of U.S. listed companies MicroStrategy and Square.

On September 15, Michael Saylor, the CEO of MicroStrategy said that his firm had “purchased a total of 38,250 bitcoins at an aggregate purchase price of $425 million.”

And on October 8, Jack Dorsey’s Fintech firm Square announced that it had “purchased $50M in bitcoin.”

Second, also on Wednesday (October 21), payments firm PayPal Holdings, Inc. announced a major move into crypto. According to PayPal’s press release, “the migration toward digital payments and digital representations of value continues to accelerate, driven by the COVID-19 pandemic and the increased interest in digital currencies from central banks and consumers.”

PayPal’s new service will allow its customers to “buy, hold and sell cryptocurrency directly from their PayPal account.” Furthermore, PayPal plans to “significantly increase cryptocurrency’s utility by making it available as a funding source for purchases at its 26 million merchants worldwide.”

Dan Schulman, President and CEO, PayPal, had this to say:

“The shift to digital forms of currencies is inevitable, bringing with it clear advantages in terms of financial inclusion and access; efficiency, speed and resilience of the payments system; and the ability for governments to disburse funds to citizens quickly.

“Our global reach, digital payments expertise, two-sided network, and rigorous security and compliance controls provide us with the opportunity, and the responsibility, to help facilitate the understanding, redemption and interoperability of these new instruments of exchange.

“We are eager to work with central banks and regulators around the world to offer our support, and to meaningfully contribute to shaping the role that digital currencies will play in the future of global finance and commerce.”

Initially, the supported cryptoassets will be Bitcoin, Ethereum, Bitcoin Cash, and Litecoin — users will be able to buy, sell, and hold these cryptocurrencies “directly within the PayPal digital wallet” — and the only supported jurisdiction will be the U.S. (this will happen “in the coming weeks”). PayPal is planning to “expand the features to Venmo and select international markets in the first half of 2021.”

Most people in the crypto community welcomed PayPal’s entry into the crypto space and saw this as a huge deal based on the belief that PayPal — which is estimated to have around 346 million active accounts worldwide — could help to increase mainstream awareness/adoption of cryptoassets in general (and not just help Bitcoin).

Third, on Friday (October 23), Nikolaos Panigirtzoglou, a Managing Director at J.P. Morgan who works on Global Market Strategy, published a report that talked about the long-term potential of Bitcoin.

The only major bit of disappointment this week has been the fact that although at the beginning of the week it seemed that the progress in the fiscal stimulus between House Speaker Nancy Pelosi and Treasury Secretary Steven Mnuchin in Washington was going to result in some kind of a deal on a comprehensive COVID-19 relief package that all sides (i.e. House Democrats, the Trump administration, and the Senate Republicans) could live with, it now sadly appears highly unlikely that any kind of stimulus bill will pass in both chambers of the U.S. Congress and get signed into law before November 3 and that it might be late January 2021 (at the earliest) or early February 2021 before we see a comprehensive COVID-19 relief package in the U.S.

On Friday (October 23), Drew Hammill, the spokesperson for Pelosi gave the following update on the state of talks:

According to a report published in the Chicago Tribune yesterday, “the Republican-controlled Senate is set to leave town on Monday after voting on confirmation of Trump’s Supreme Court nominee, Amy Coney Barrett.” As for the Democrat-controlled House of Representatives, it has suspended sessions until November 16. Although “members of both chambers could be called back for a vote with 24 hours notice, that scenario is increasingly unlikely a week before the election.”

However, despite the seemingly stalled stimulus talks, the events of the past week seem to have put crypto investors (especially Bitcoin HOLDERS) in a very bullish mood.

The Crypto Fear & Greed Index, which is based on an analysis of “emotions and sentiments from different sources”, is currently telling us that we are in “Extreme Greed” category: 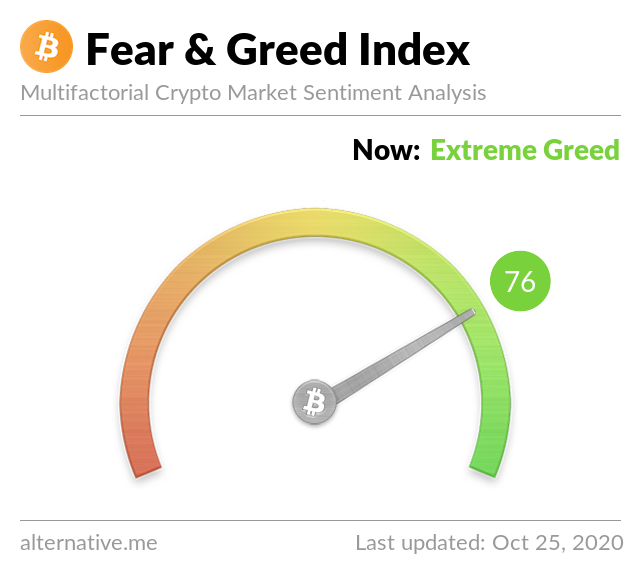 Currently (as of 14:20 UTC on October 25), Bitcoin is trading at $13,005, down 0.83% in the past 24-hour period despite the fact that many technical analysts were saying that Bitcoin was in overbought territory and that we should not be surprised to see in the near future a retracement to below the $11K level.

According to on-chain data provided by the Chainalysis Market Intel dashboard, between October 21 (the day of the PayPal announcement) and October 24, BTC inflows to exchanges dropped from 108,709 BTC to 42,321 BTC.

As for the change in the amount of BTC held on exchanges, which is the “daily difference between asset inflows and outflows on all exchanges covered by Chainalysis”, on October 22, there was a net inflow of 40,065 BTC, whereas on October 24, the daily change was only 15,941 BTC.

Featured Image by “SnapLaunch” via Pixabay.com