A Goliath transfer of $1 billion in bitcoin (94,504 BTC) was transferred today. Luckily the transaction was caught by the ever-vigilant, Whale Alert — a Twitter account responsible for the signaling of whale movements within the crypto ecosystem.

Rumor and speculation arose shortly after, with users on Twitter offering a myriad of theories alluding to who might have been the originator for the funds.

A few users suggested that the funds were likely a deposit for Bakkt, which per a Tweet by the firm, starts accepting the storage of customer bitcoin today, in anticipation of the official launch on September 23.

This was corroborated by Analyst Alx Kriger who highlighted that these funds came from a non-exchange address; ruling out the likes of Binance, and Coinbase who have been known to make similarly large transfers.

Aside from the shock and awe at this mammoth transfer, the charge for sending the funds was also somewhat astonishing, citing a transaction fee of just $700. 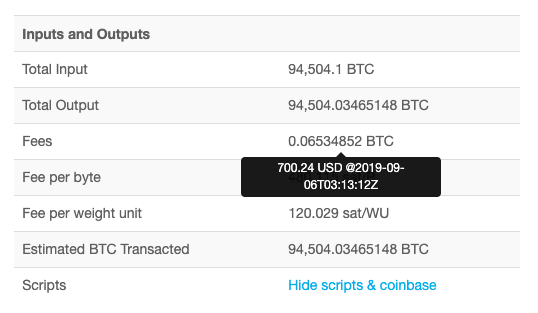 To put this in perspective, sending just $1 million via international remittance firm, Trasnferwise, would accrue a 0.36% fee. Calculating that fee by $1 billion would result in an enormous $3,600,000 in transfer fees.

Nevertheless, it appears the sender, whoever they may be, overpaid for the transfer. Typically transaction verification costs just 23 satoshis per byte. However, the fee paid per byte stood at 480 satoshis; Still, beats using a bank.