DataLight is a unique tool allowing crypto traders to analyse cryptoassets and make precise data-driven trading decisions. DataLight gathers tons of data on crypto projects, processes it and presents it in a convenient and customizable form. Market data, social media activity, blockchain data and many other metrics are visualized on a dashboard that users can adapt to their needs. It means that traders will no longer have to spend their time scrolling through hundreds of pages in search for the data they need.

Starting on the 10th of December last year, TRON showed steady growth, doubling in price in an unstable market.

At the moment, TRON is in 8th place in terms of capitalization, not far from the top 5. Could that have been predicted? We think so, as there were a few indicators that this kind of growth might have been coming. 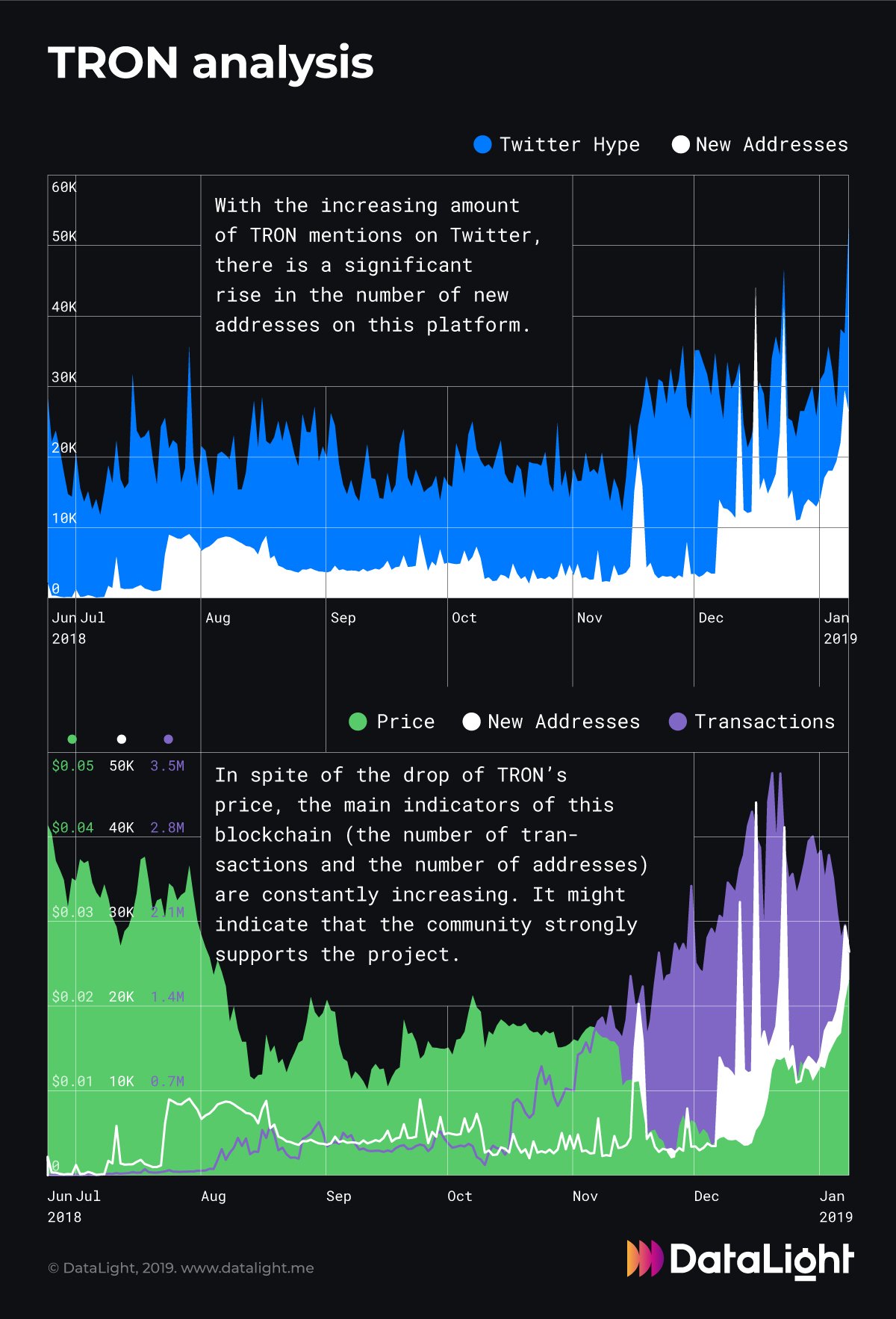 It is widely known that in the summer of 2018, TRON acquired the most popular torrent tracker in the world, BitTorrent. That already gave TRON some momentum.

A few weeks ago, it was announced that BitTorrent will release its own BTT token on the TRON platform that can be obtained for activity with torrents. Considering that the number of BitTorrent users has exceeded 100 million, realization of this fact undoubtedly contributed to the hype around the project.

After transitioning to its own platform at the end of June 2018, the number of blockchain transactions on TRON has steadily increased. In December, the number of transactions exceeded 3 million for the first time. Since then, this number has not dropped below 2 million transactions per day. According to this indicator, TRON occupies the second place ahead of Bitcoin, Ethereum and XRP, only behind EOS.

A similar situation can be seen with another important indicator of blockchain activity as the number of TRON accounts has exceeded 1 million, an increase of 600,000 accounts in the last 30 days.

Justin Sun, CEO and founder of TRON, has set a number of ambitious goals for 2019:

● Enter the top 4 list of cryptocurrencies at CoinMarketCap
● Make TRON’s ecosystem larger than that of Ethereum
● Bring 100 million users of BitTorrent into the TRON ecosystem
● Make TRON the largest decentralized system.

While these goals may seem highly ambitious, 2018 was undoubtedly an impressive year for TRON.

TRON is trying hard to solve problems with respect to its legal status.

On the 10th of January, a chief compliance officer appeared in TRON’s team. David Labhart, former United States Securities and Exchange Commission (SEC) supervisory attorney, will try to settle the legitimacy of TRON in the United States and other jurisdictions.

The market responded immediately to this information with growing social media hype and a corresponding increase in TRON’s price by 32%.

There may or may not be solid fundamentals underpinning TRON’s growth. But you don’t have to follow every news story and be a blockchain specialist to make accurate trading decisions. You can follow the mood of the market, influenced by a collection of indicators.

EOS and TRON Dapps Crushing It When It Comes to On-Chain USD Volume, Latest Research Indicates

Strong Rally by Altcoins Helps Bitcoin to Go Over $9,400 for 1st Time in 2 Weeks

Crypto Analyst Willy Woo: Next Bitcoin Bull Run Could Start in One Month

Bitcoin Drops Below $9,000 Due to Concern Over Surge in COVID-19 Cases